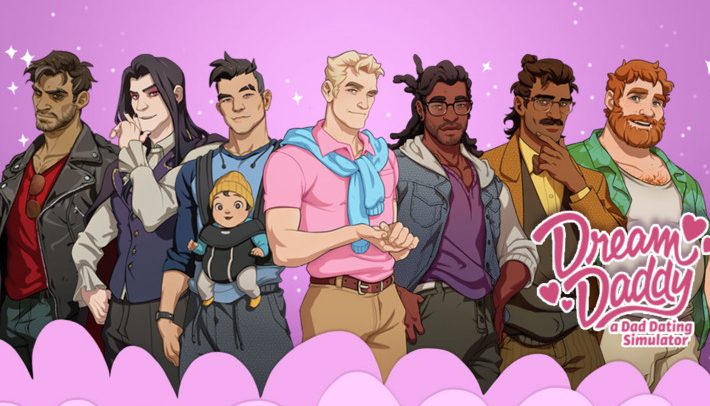 Okay.  I know what this looks like.  And frankly, this turn of events–that is, my playing otome games at all–is not something I ever expected to do.

Before I get too far into this blog post, let me answer the first question I know nearly everyone reading this has on their minds.

What in the world is an “otome” game?

An otome video game is, according to Wikipedia,

a story-based video game that is targeted towards women. Generally one of the goals, besides the main plot goal, is to develop a romantic relationship between the female player character and one of several male characters.

“Otome,” which means “maiden” in Japanese, is an appropriate title for the game type.  With its stylistic, heroic men; its symphony-sweeping music; and its promise of adventurous, everlasting love, it’s hard not to be intrigued.

That is, if you’re anyone but me.

If you’re me, you couldn’t care a hoot about these games.

And yes, I will continue to lie to myself this early in the post.

Since my re-emergence into playing video games on a regular, casual basis, I’ve noticed that otome games and other romantic-style visual novels are appearing more often in my Recommended lists and on the channels of some of my favorite YouTube gamers.  At first (especially when the thumbnail or trailer depicted a group of “sexy” men vying for a single girl’s affections), I rolled my eyes and clicked past the sucka.  “What a bunch of melodramatic dribble,” I quipped and continued browsing Steam, Xbox and my Google Play recommendations.

However, the gaming market has become more saturated than usual with otome games.  The suggestions kept popping up.  My curiosity, despite my best efforts, began to sprout.  And it culminated when I noticed famed gamers Markiplier, Jacksepticeye, and finally Game Grumps playing what appeared to be a normal, adorable guys’ romantic visual novel (known as a bishōjo) game.

Now, I will say this.  This game is free to play on Steam, so if you enjoy games with horror themes, I highly, HIGHLY recommend playing it.

Yes.  This is a horror game.

Yes, I watched the trailer.  Do not be fooled.

Don’t say I didn’t warn you.

Anyway, as I mentioned before–I saw enough YouTubers playing this game that I finally grew more than curious of otome and bishojo games.  Why in the world are they playing this silly dating game, I thought in disgust.  What could they possibly be thinking?

Granted, with DDLC being a horror game, it holds a slightly different agenda than traditional, love-soaked otome games.  I also learned that watching it (or rather, watching Danny of Game Grumps react to playing it) was a pleasure all its own.  Horror aspects aside, though, it was obviously a game that its creator, Danny Salvato, put a great deal of time and thought into.  I’ve read that one of his main reasons for even creating the game was due to his own love/hate relationship with the romance visual novel genre.

I can understand his inner conflict.

Still, I continued to resist the pull of non-scary otome games–until I was introduced to one that was both traditionally otome and wonderfully unconventional.

How did a game called Dream Daddy hook me?

Welp, now I have to play it.

You are a single father raising your precocious high-school daughter as she prepares to transition into full adulthood–and college.  You’ve just moved to a new town where the nightlife (and day life, really) are swarming with attractive, handsome, sexy, charming…daddies.

The game is ambitious in that it takes a gaming style founded and popularized in Japan, and adapts the structure using a wide spectrum of American male tropes.  Not only that, but it incorporates the LGBT community by exploring perspectives from a single, homosexual/bisexual father’s point of view.  Getting back into dating is hard for everyone–and this game proves it.

From a gameplay perspective, the artwork is clean, and the dialogue between characters is fun while allowing the player to remain engaged by choosing conversations and actions, thus impacting final outcomes and even storyline endings.

“Okay, cool,” you say.  “That is different.  Any other reason I should like this?”

Did you not watch the trailer?  Look at the daddies.

The Depth of Otome Games

Each of the “daddies” in Dream Daddy has a distinct personality and set of standards that you get to know as you play the game and select one to woo.  What makes this so interesting is that the best choices to make for one daddy (eg. self-deprecating humor) may not fly for another.

None of the daddies are the stereotypically idealized version of a single male form. So, no–not a bunch of John Cenas with different hair colors.  Real people have different preferences, and this game caters to this in ethnicity, age, body size, body type, and even fashion sense.  Options range from a freckled, bearded redhead with a big belly and a near-boastful regard for his genius daughter, to a slender Hellsing-esque Alucard lookalike with the eye of a Beetlejuice-sponsored interior decorator.

(How many 80s and 90s references can I stick in a sentence?)

On top of their appearances and personalities, each papa is a person dealing with his own real personal issues.  Insecurity, faith, depression, social anxiety, and self image are just a few of the topics that arise.  As you date and raise your own wily daughter (cuz yeah, you’d have to balance that in real life, too), you as a player can decide whether the issues are something you want to embrace, date around, or label as deal breakers.

And that’s how otome games get you.

You pick one outcome, but then you grow curious about the other options.  You wonder if you could have made your date want you more.  You fantasize about dating another daddy, so you restart with a new route.  You pick an okay dialogue choice–dang it!  Now you have to reopen a save point from, like, an hour ago because you were so involved in that addictive minigame to save more often.

And don’t get me started on accidentally clicking the Skip button when you only mean to turn up the volume!

Or, so I’m guessing.

I will say–writing down this timeline of interest does make it easier to see the inevitable progression this journey into otome games has taken me.  With my unparalleled knowledge and experience in the gaming genres I have already mastered (/sarcasm), I was bound to become too intrigued to not start exploring these new ranks.

It was only a matter of time before I went full native.

I never thought I would go there.

I certainly tried not to go there.

So then why, pray tell, have I played this game on my phone every day for the last three months, without fail?

I didn’t just dive in.  I created an underwater domicile.

And I’m not coming up for air yet.

By the way–if you haven’t already, check out Dream Daddy or Doki Doki Literature Club on Steam.  I highly recommend them both.