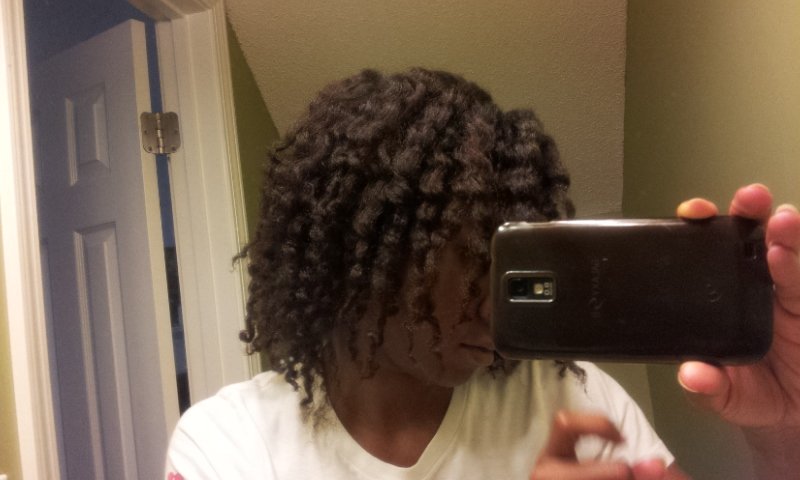 Back to My Roots: (Re-)Growing My Natural Hair

Remember when I said that I was done trying to grow my hair to epically long proportions?

HOWEVER…a few days ago, I came across a vlogger that I used to watch religiously circa 2010-2013. Her name is Whitney, but she goes by the user name Naptural85. Basically, for those who don’t know her, she did what was initially deemed near impossible, especially for an African American woman.

She grew non-chemically altered (aka natural) curly/coily hair from a few inches to all the way down her back.

With over 1 million subscribers on YouTube and appearances on multiple high-level media circuits, she is not someone to simply shake your hair at.

African American (and curly/tightly coiled hair in general) hair has several variables that count against its ability to keep and maintain length, strength, and moisture:

Buuuuut, I will save that rant for another post. 😇

As I was saying before–a few days ago, I chanced upon one of Naptural85’s latest hair posts. I’d stopped watching her videos regularly years ago; however, since this post was so recent (posted in August), I was curious to see what she had to say about the latest 2019 hair-growing practices that she was sticking to and what continued to give her the best results as far as healthy, enviable hair growth.

Let’s take a listen below, shall we?

One thing that I will say about Naptural85’s hair videos is that, while she has tested the occasional trend and gimmick just to see if the hype is real, her actual focus on growing her hair and keeping it healthy has never been hokie. She has never been afraid to pioneer her own methods, especially when the wave of natural hair-styling wagons originally rode through in the mid- to late 2000s.

Not only that, but she’s consistently posted her progress from her TWA (teeny weeny or tiny widdle afro) to what it is now. She is literally walking proof that a black woman with short 4a hair can, with patience, dedication, and determination, grow long, healthy hair.

However, I have to be honest with myself. Her hair length was actually very close to mine when I big-chopped in 2009/2010ish. I was, perhaps, a few months behind her. I watched her videos, kept my hair clean, bought shea butter to seal, the works.

Her growth took off. Mine did not–at least, not to that extent.

Was part of the equation something else? Genetics, perhaps? Nutrition? Environment? Stress levels?

Abso-freakin-lutely. The list of impactful variables knows no ends!

But that is one reason why I “gave up” on a near-fanatical desire for long hair. I had to stop comparing my length with someone else’s. I also had to stop equating hair length to personal quality and beauty.

For example, my older sister’s hair is the 3b/3c hair type. Since her big chop to remove the chemical relaxer from her straight hair about four or five years ago, she can now simply put leave-in conditioner on her hair, then Eco Style gel, then let it air dry–and that’s it.

Her hair will behave from that single wash for up to three weeks. Not only that, but when stretched, it is well down her back.

My scalp is a sensitive mess and demands washing/clarifying twice a week. My curl pattern is so 4a, it’s astounding. My hair and/or scalp loathes nearly every popular natural ingredient out there:

Seriously. I could not be kidding less about this list. If I use products with any of these ingredients, it has to be low on the list of ingredients or mixed with a heck of a lot of other stuff.

Instead of turning haircare into a chore, I turned it into an adventure–which is what most African American women have done. It’s also why you’ll often read about a black woman’s natural hair “journey.” If we want our hair to look good, we’ll never not be able to think about it.

What Prompted My Re-Growth Revival

I’ve been going through some various levels of…”events” over the last year. Things were changing at a speed and a debilitating level that I did not expect. I felt like I’d lost control over a lot of elements. My health, my life–and many relationships.

Due to time and energy and wellness (or rather, lack thereof), I grew lax on my hair care. Then, I became bored.

Then, I got everything else with it, to the point that I just didn’t want to–and couldn’t–deal with it.

This is circa April of this year, before the first cut:

And this is after it:

And yes…I did say “first cut.”

Now, don’t get wrong–I adored this cut. Like, a lot. I’d needed some kind of change at the time and really wanted to look in the mirror to see a different side of myself.

That…and it was a hot spring. I wanted the hair off my neck.

However, when I sent the above pic to my family–you know, for the fun shock value of it all–the response I got was lack-luster.

And…of course…we all know what happens when we (i.e. I) get egged on (or, in my case, ineffective responses from our families).

BACK into the bathroom I went–along with the grumblings:

I’ve adored having my hair short again. Wash day is faster, styling is more convenient, and it’s kinda fun to have strangers marveling over the fact that my natural curl pattern is literally the size of a pen spring.

But…I do miss the fun of having more hair.

It wasn’t easy to take care of, but…it was a fun hobby. And when I was putting all the necessary work into it–I saw my own level of results.

Once I’m able to return to regular life, I’ll add a few of my favorite DIY hair recipes that have remained tried and true for the last 10 years. Items like the good ol’ fashioned mud wash, the mango-cupuacu butter sealant, and my morning apple cider vinegar-cayenne pepper-MSM-raw honey drink.

And so, with a decade of knowledge behind me, a set of fairly well-proven tools and practices, and a refreshed Naptural85 video to “reinforce” that my techniques are/were on the right track 😛, it’s time to reembark on my Natural Hair Re-Growing Epic Journey….Extravaganza.